Substitutes for Onion – What can I use instead? 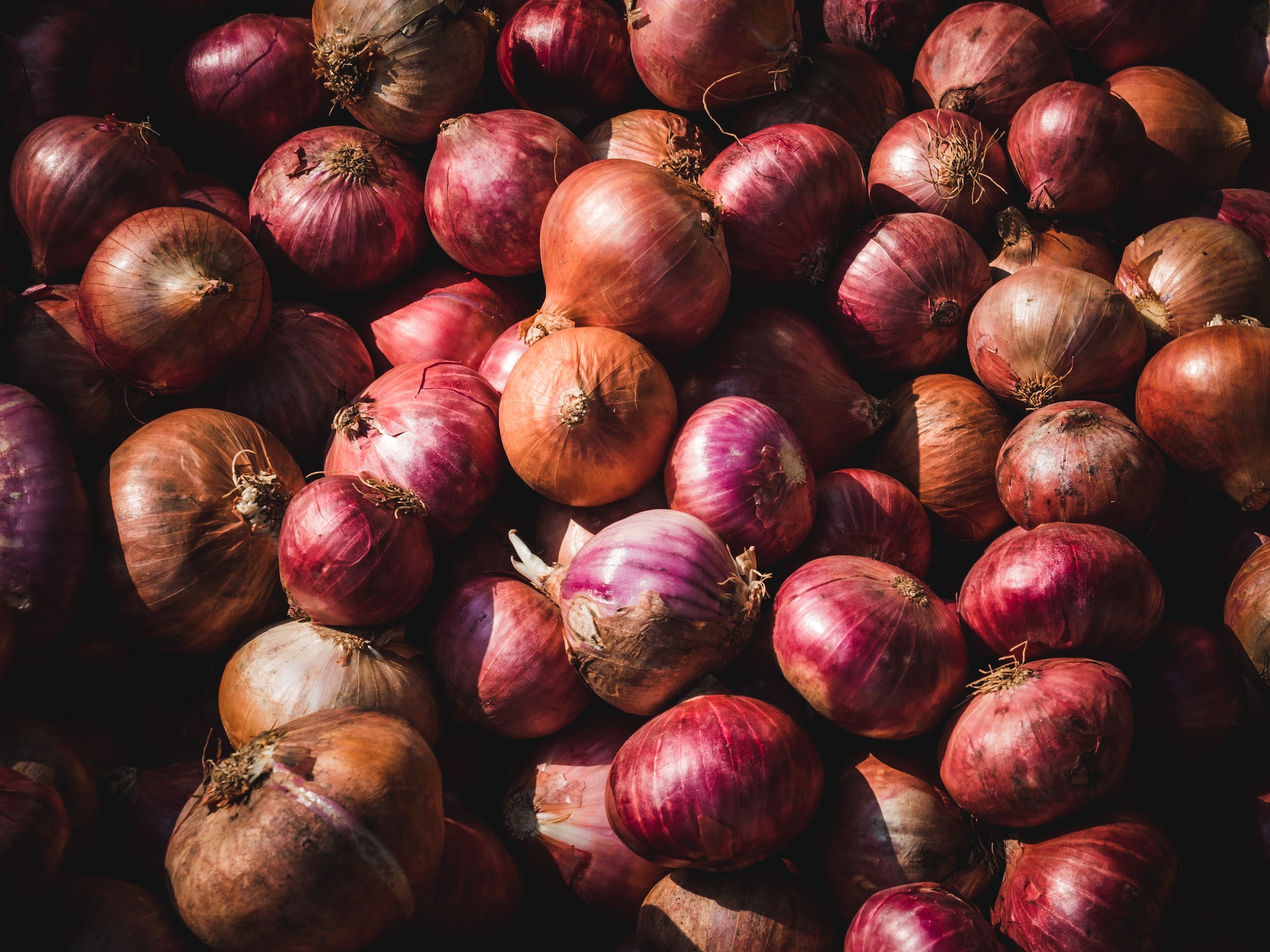 Onions are used in an endless number of international cuisines and are the most popular and widely grown and used vegetable of the allium family. They can be found in countless countries and serve a variety of purposes in thousands of recipes, ranging from African to European to Asian cuisines.

Alliums are a genus of vegetables that, aside from onions, also includes garlic, scallions, shallots, leeks, and chives, all of which have a strong aroma and flavor. Though it is uncertain where they originated, onions are now cultivated all around the world.

They grow best in well-drained, fertile soils and are able to adapt to a wide range of temperatures, another reason why they can be found all over the world. However, if you or a guest can’t stand the taste of onions or you are simply looking for an alternative, the following substitutes are perfectly appropriate.

Onions serve an important role in so many dishes, and are also a healthy food that should be included in a balanced diet, as they contain only 40 calories and less than 10 grams of carbohydrates per 100 grams. Additionally, they are rich in vitamin C and B vitamins and are a great source of antioxidants.

Onions also have the potential to lower cholesterol and reduce the risk of heart disease, and they contain a number of cancer-fighting compounds. Finally, onions are full of fiber and prebiotics, which can help to improve digestive health.

There are three main varieties of onions: yellow onions, red onions, and white onions. Yellow onions are sweeter and more commonly used in European cooking, while red onions have a strong and sharp flavor and are preferred in Asian cuisines. White onions, on the other hand, are milder and very popular in Mexico.

While they rarely serve as the protagonist of a dish, onions are used in an endless number of recipes to add texture and flavor. Though very strong when consumed raw, yellow and white onions especially are very sweet when slowly sauteed and caramelized.

●Onions can be cooked. The most common way to prepare onions is by cooking them with other ingredients into a dish. There are an endless variety of ways to utilize onions in recipes, but some of their most common uses include adding flavor to broths, soups, and stews; being chopped up and cooked into sauces; and serving with meat, poultry, or fish. They are especially delicious when sauteed, but it is also possible to roast or grill them.
●Onions can be served raw. Though they will have a much stronger flavor than when cooked, onions can also be served raw. They add a great kick on hamburgers, sandwiches, and salads, and are a key ingredient in salsa and guacamole.
●Onions can be the star of the show. There are, in fact, a few delicious dishes that protagonize onions. French onion soup, onion rings, and caramelized onions are just a few ways to highlight the rich flavor and sweetness that onions have to offer.

The best substitutes for onion

If for some reason you are looking for a way to substitute onions, you have nothing to worry about. There are a number of other vegetables and other members of the allium family that are the perfect replacement for onions, and the right option for you depends on the dish that you are preparing.

So, without any further ado, here are the top 5 best substitutes for onion!

Shallots are an incredible option when it comes to substituting onions. Shallots have a sweet, yet strong, flavor, and though they lack the bite that raw yellow and white onions have, they are an excellent replacement for onions when cooked into a dish.

Shallots, however, are higher in calories and carbohydrates than onions, with 72 calories and 17 grams of carbohydrates per 100 grams. This shouldn’t really be of concern though, considering that the quantity of onion or shallots typically used in a recipe isn’t large enough to provide a significant caloric intake.

To swap onions for shallots, you will want to use about 3 shallots per small onion. Just keep in mind that shallots have a bit of a milder flavor than onions, so if you’re looking for a real kick in your recipe, it might be lacking when substituting shallots for onions.

Leeks are another excellent substitute for onions. Like shallots, they have a significantly milder flavor than onions, but they serve as a perfect base for soups and stews. Leeks have 61 calories and 14 grams of carbohydrates per 100 gram serving, and are also a great source of vitamins A, B6, and C.

It is easy to swap out leeks and onions in a recipe, as you can use them in equal ratios. But keep in mind, just like with shallots, that leeks are relatively mild. However, if your recipe calls for sauteing or cooking down onions, this shouldn’t have a significant impact on the outcome of your dish.

Scallions are very commonly used in Asian cuisines, so they are an excellent onion substitute when preparing a stir fry, pad thai, or fried rice. Scallions, also known as green onions, are also very easy to use when replacing onions, as they can be substituted in a 1-to-1 ratio.

You should just be aware that scallions require a shorter cooking time than onions, as if you cook them for too long, it is possible that they could become soggy and limp.

Chives, another member of the allium family, are classified as a herb and are technically an aromatic grass. They pack a lot of flavor and have a milder, less-pungent flavor than onions. They are also incredibly healthy, with only 30 calories and less than 5 carbohydrates per 100 gram serving. Additionally, 100 grams of chives provides 87% of the daily recommended value of vitamin A and 96% of the daily recommended value of vitamin C.

Unlike onions, chives are commonly incorporated into recipes without cooking them. They can be chopped thin and sprinkled on top of a dish or incorporated at the end of the cooking process to add a little bit of bite and aromatic flavor similar to that of onions.

Chives are very commonly used to garnish soups and salads and pair exceptionally well with egg dishes, such as omelettes, deviled eggs, or eggs Benedict.

Though it might come as a surprise to some, fennel can also serve as an appropriate substitute for onions. The only non-allium alternative on this list, fennel is a great option when you are looking for an onion replacement because you want to avoid their strong, pungent flavor.

Fennel has just 31 calories and 7 grams of carbohydrates per 100 gram serving, making it a very healthy alternative to onions. You won’t be able to replace it for raw onions in a salad or on a sandwich, given that the two have very distinct flavor when consumed uncooked.

However, cooking fennel will help to soften its strong anise taste, as it will become rich and even sweet when sauteed, making it a great option when it comes to replacing onion as the base of soups and stews.

How to substitute onion with other alliums?

Which onion substitute you use and how you use it depends on what exactly you plan on preparing. The majority of onion substitutes can be used in a 1-to-1 ratio, though you only need a small amount of chives to add the proper flavor and kick that alliums provide.

When it comes to dishes in which onions are served raw, you have a couple of options. Shallots, for example, go well in vinaigrettes or on salads, while chives are the perfect topping for eggs or soups. The green tops of scallions can also be thinly sliced and sprinkled over a wide variety of dishes.

When it comes to replacing onions in cooked dishes, leeks, scallions, shallots, and fennel are all great alternatives. The white part of scallions should be used, as it adds more of a kick than the upper green part, but just be sure not to overcook them, as they could become soggy. All of these alternatives can be sauteed or sweated to mimic onions as the base of soups, stews, and sauces, given that they all result in a slightly sweet taste and smooth texture similar to that of onions.