Substitutes for Parmesan – What can I use instead? 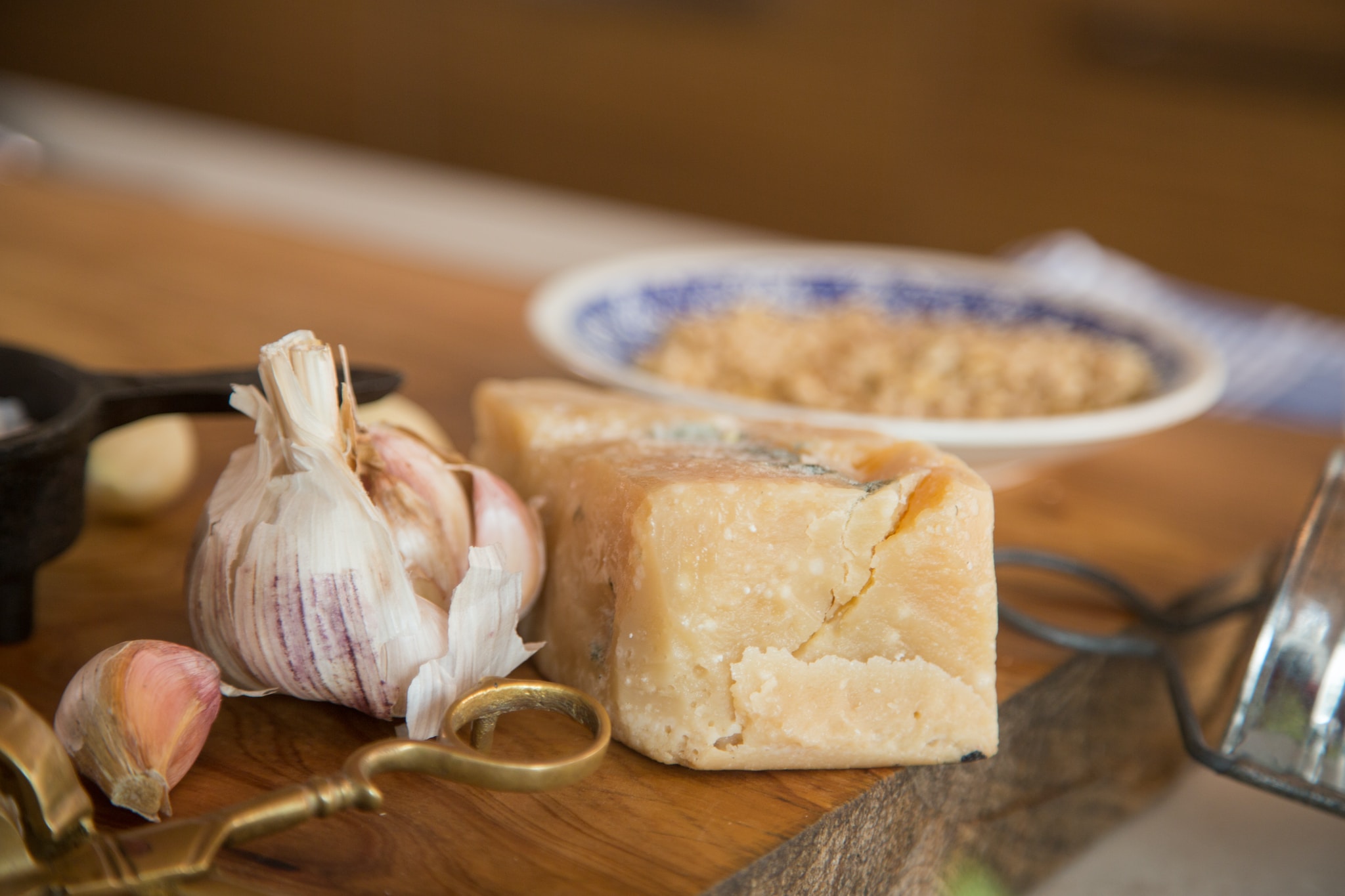 Parmigiano-Reggiano, also known affectionately as “the king of cheese” is essentially the perfect accompaniment to Italian food. With such a lofty reputation, one would expect that substituting for parmesan would be a near-impossible task. Perhaps there may be an expectation that anything you could possibly substitute in for Parmesan would somehow make your recipe taste second-rate? Thankfully, this is not entirely true. So, running out of Parmesan might not be the culinary disaster that you might have expected it to be. There are plenty of decent substitutes out there that can hit the same flavor notes as Parmesan, some of which may even fool even the most refined of palettes. Naturally, it is much more difficult to fool the purists than it is to fool Italian cuisine enthusiasts. In some areas of Italy, the locals can even tell the difference between Parmigiano-Reggiano and “regular Parmesan”.

Though many of us may have only ever used Parmesan as a topping cheese, it does have a much broader importance in the culinary world. It pairs fantastically well with roast vegetables, particularly root vegetables, and can also be added to sauces. Likewise, it can be made into jaw-droppingly delectable wafers and biscuits, and it also can simply be deployed as part of a cheese board or in a salad. There really are millions of excellent recipes including Parmesan out there. It seems that no matter what it touches, it just adds a little bit of class to the affair. Some of our favorite recipes using Parmesan are:

Though all of these dishes are relatively easy to prepare for even the most novice of chefs, each has the potential to wow your guests. And it is difficult to imagine any of these dishes having anywhere near the same ‘wow’ factor if the Parmesan were to be removed from the equation. Luckily, if you have no Parmesan at your disposal, we’ve got ways to make sure that these dishes and many more can still impress. So, if this is the information you are looking for, you’ve come to the right place!

The best substitutes for parmesan

As we have mentioned, no substitute for Parmesan is ever going to trick a native Italian foodie – they are just way too knowledgeable for that! However, listed below are 7 great options that will fool 99% of people, 99% of the time. Naturally, some will be better for certain uses than others, but rest assured that we’ve covered every available base with this list. We’ve even added a vegan substitute! So, without much further ado, here are our top 7 best substitutes for Parmesan that money can buy!

Most of us have come to consider Grana Padano as a cheaper and less desirable version of parmesan. This is unfortunate as it does have some great qualities and strengths of its own that often go unnoticed. For example, it has a delicious undertone of nuttiness to its flavor which is then balanced with just the right amount of saltiness to finish. Like parmesan, Grana Padano is an aged semi-fat cheese that comes from cow’s milk. This gives it the same texture as parmesan when you first bite into it. However, after you bite into it, something curious happens. It begins to almost melt in the mouth. For some, this is a desirable quality that would make it appealing for usage in soups, salads, and even as a topping cheese. For the purists, this melt in the mouth quality can be hard to overlook. We would definitely recommend trying it once!

Pecorino is the only sheep’s cheese to have made this list. One would imagine that the fact that it has been made from a different form of dairy would make it completely incompatible with Parmesan, but this simply isn’t the case. Pecorino, which is derived from the Italian word ‘pecora’, meaning ‘sheep’, is mainly produced on the Italian islands of Sicily and Sardinia. There are various forms of this delectable cheese, ranging from super soft, right up to the incredibly hard ‘stagionato’. This latter variety has all of the best qualities of Parmesan. It is hard, crumbly, and grates in the same way as Parmesan. The flavor is also remarkably similar. Pecorino is both sharp and nutty in flavor, which is exactly what you are looking for when replacing Parmesan in a recipe. However, Pecorino stagionato is also quite a bit saltier than Parmesan. Avoid adding any extra salt.

Reggianito is remarkably similar to parmesan in both texture and flavor and depending on where you are in the world, it can be relatively easy to get your hands on. Originally made in Argentina by Italian farmers who missed the taste of home, Reggianito is a cow’s milk cheese that is aged for 6 months. Its flavor is quite mild and inoffensive, which makes it a reasonably good salad cheese. However, where you may notice the difference between the two kinds of cheese is in their feel. Both to the hands and in the mouth, Reggianito can feel a little rubbery. We wouldn’t let this discourage us from using it as a topping cheese though. Don’t worry, it still grates well enough to be considered a great stand-in for parmesan on the whole. Indeed; traditionally its uses are as either a grating or cooking cheese.

Most of us associate Cotija with having a soft and creamy texture and would never consider using it as a substitute for parmesan. And, in most cases, we would be right. However, there are aged versions of cotija out there which can give parmesan a run for its money. Aged cotija is hard and crumbly in texture. When it is in this state, this lesser-known Mexican cheese truly earns its nickname, “the parmesan of Mexico”. Traditionally, it is generally used in chili, tostadas, and tacos. However, in America, it more commonly finds itself being used in the same manner as parmesan. This makes quite a bit of sense, as really the only discernible difference between the two is that cotija has a slightly sharper and saltier taste. If we were to dock points from cotija, it would only be because it can be incredibly difficult to source.

Once again, we have another Italian substitute for parmesan. Asiago, though not that commonly used, has quite a few benefits and similarities to parmesan that should not be overlooked. It is a cow’s cheese that can be found in various textures, depending on long it has been aged. Naturally, we are going to suggest that you get the oldest and hardest version of this cheese’s that you can! The aged version forms a vaguely crumbly texture that can also be sliced and used with salads, or grated as a topping cheese. Really, the only difference that you might notice between Asiago and Parmesan is that Asiago is slightly sweeter. Asiago, though Italian in origin, is currently made in Australia and the US as well as in Italy. This is perhaps one of the best substitutes that exist for parmesan. Pretty much anything that parmesan can do, this can do it too!

For those of us who are vegans or lactose intolerant, there is an option that should hit the spot – soy parmesan. In recent years, the vegan market has expanded to the point where there are tons of companies out there making great parmesan products, lactose-free! This is a great option for those who want that distinctive taste of Italy in their home which would otherwise be unavailable to them. Nearly all of them will grate just the same as a dairy-based parmesan, making them great for use on soups, salads, pizzas, and as a topping cheese. Our favorite example of a quality vegan parmesan is made by the ‘GO Veggie!’ brand. If this isn’t available in your area, vegan parmesan is actually surprisingly easy to make at home. If you are this way inclined, there are plenty of excellent recipes available online.

For those of you based in the states who want to try something a little bit different, this is the option for you! Made from cow’s milk that is then aged for 18 months in a cave, this Grana is pretty authentic in nature. It has all of the same nutty and sweet undertones and pairs excellently with everything that Parmesan does. It is excellent on a cheeseboard, with salads, and grated on top of pasta dishes. It also has the same melt in the mouth quality as Italian-origin Grana Padano. For some, this may be a con, but if you’re a fan of this quality, you will absolutely love it! American Grana is made by the BelGioioso company who are based in Wisconsin. So, if you’re based in America and want to try a solid replacement that is sourced locally, this is your best bet!

How to substitute parmesan with other cheeses?

Substituting for Parmesan is remarkably easy. There are no complex calculations to do, and none of the ingredients listed above will change the flavor of your dish dramatically. However, one or two of these substitutes will be naturally a little saltier than Parmesan. In these cases, it is best to add less salt during the other stages of cooking. By doing this, you can totally negate the effects of the extra saltiness of the substitute.